You are here: Home1 / About Libya2 / Festivals in Libya 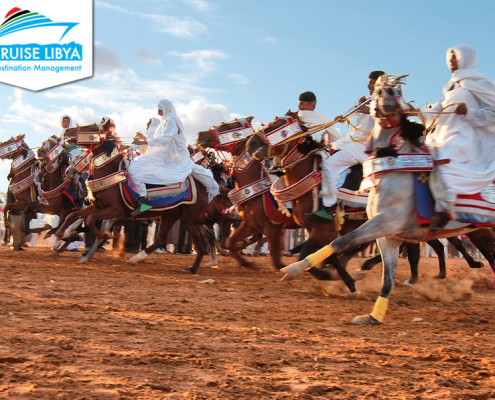 Festivals in Libya are very popular and well visited by many locals through the whole of Libya and neighbour countries. Some festivals in Libya get more and more recognize throughout the world because they are very unique in culture.

Ghadames Festival
In October/November Ghadames’ annual International Festival is one of the Sahara’s most colorful events. It’s a three-day celebration of the traditions of the nomadic Tuareg people. This festival brings the old city alive in a riot of color and activity. Ghadamsis return to their family homes in the old town and open the doors for singing, dancing and public festivities such as: open marketplace, horse and camel races outside the city walls, most of them preformed in traditional dress.

Ghat Festival
Set in a Tuareg oasis deep in the Libyan interior is another cultural festival. The town of Ghat, surrounded by desert, dunes and the dramatic Acacus range, houses its own ancient medina. Ghat festival is normally organized around New Year and takes place here, with music, dancing, Tuareg camel racing and traditional crafts on display for locals and foreign visitors to enjoy.

Nalut Spring Festival
The three day Nalut Spring Festival held in March celebrates local traditions, industries and culture, much like the Ghadames and Ghat festivals. Set in the impressive old town of Nalut in the Jebel Nafusa of western Libya, the festival showcases crafts and features parades, traditional music and nightly dance performances. Being on the main route to Ghadames the festival is very popular for foreign visitors and tourists, in their way to the desert sites of Acacus and Waw Namous.

Zuwarah Awessu Festival
The Awessu festival was originally a sea ceremony held in the town of Zuwarah, a beach destination in west Libya. It marks the beginning of a special period where peolple tracing back to their pre-Islamic times. The Berbers of Zuwara take possessions and livestock into the water for ritual bathing before sunrise. During the years the festival became more commercial so today it mainly consists of sailing and swimming races as well as folk music, dancing and generous traditional feasts.