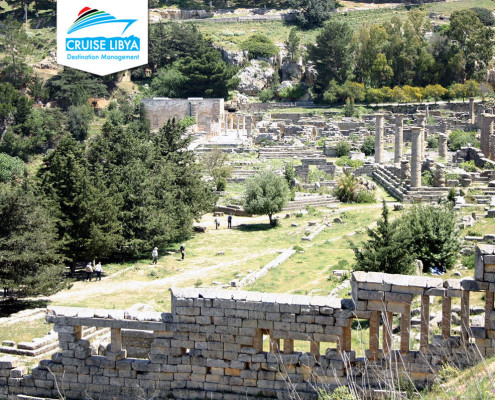 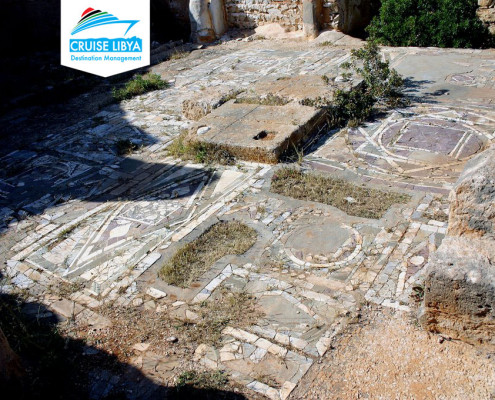 Cyrene is an unique and glorious ruin! Just like Leptis Magna is famous for is monuments and for its setting, looking out over the Mediterranean from an elevated rocky perch. Cyrene is Libya’s most complete ancient Greek city. Cyrene was the most important Greek city in North Africa, founded in the 7th century BC by a party of immigrants who had fled the drought-inflicted island of Thera in the Aegean Sea. Under King Battus IV (515-470 BC) it enjoyed a period of relative calm and prosperity. From 322 BC Cyrenaica came under the control of the Greek general Ptolemy I and his dynasty. In 96 BC the Romans took possession of Cyrenaica and it became a province of Rome eighteen years later. Thereafter it enjoyed a period of peace until a Jewish revolt in 115 AD caused widespread destruction.  Following reconstruction under the Emperor Hadrian Cyrene again entered a period of prosperity.
In 365 AD, during the Byzantine period an earthquake destroyed much of the city which at the time had not yet embraced Christianity. A grand rebuilding program took place although former places of pagan worship were desecrated including the great temple of Zeus. Built on a series of levels the spectacular ruins of Cyrene include the Sanctuary and Temple of Apollo, the Acropolis, the Agora, the Forum, the Stoa of Hermes and Heracles, the House of Jason Magnus, the Nine Muses and the Temple of Zeus.