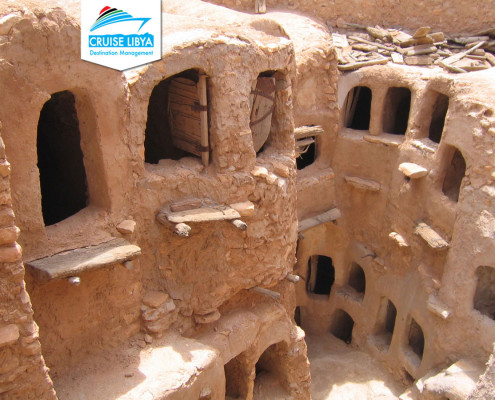 Nalut lies on the western end of the Jebel Nafusa. With its fresh air and good views it’s a good place to break up the journey from Tripoli to Ghadames or back. The  Nalut qasr was once the old towns’ centre piece now it remains almost completely surrounded by the uninhabited remains of the old village that clings to the hillside. The views over the mountains and plains from any of the elevated aeras around the qasr are superb. This qasr in Nalut  is the main section of an ancient granary. The gate is usually kept locked but inside are small rooms used for storage giving the feel that Nalut was once a small fortified village. The interior is strewn with old pieces of pottery once used to store dates, wheat, and oil. You can still see an old mill wheel once used to make pure oil. There are 3 mosques with the “White Mosque” only one still in use today, The Alal’a Mosque is Nalut’s oldest with Arab inscriptions stating that it was re built in 1312.