You are here: Home1 / About Libya2 / Sights in Libya3 / South of Tunisia 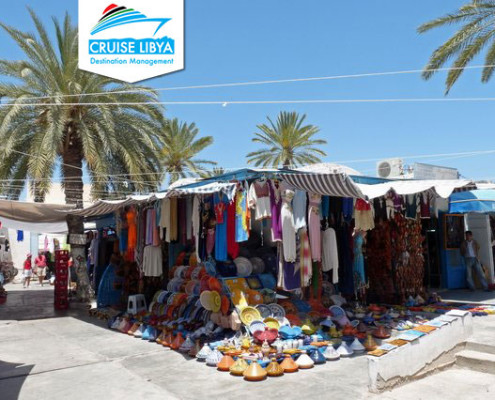 Djerba Island
Djerba Island is the largest North African island and a very popular tourist attraction because of the relax atmosphere, very interesting culture sights, great beach hotels, picturesque sunsets and beautiful sandy shorelines. From Libya it’s about about 300km drive to Djerba. The island has a host of activities and is rich is history and culture. You will be amazed at the beautiful architecture of the whitewashed houses along with the farm lands filled with olive trees, figs, apricots and palm trees. For people who love to golf there is a large golf course offering an eighteen and nine hole green.
Houmt Souk
Houmt Souk is the capital of the island of Djerba. It’s a popular tourist destination, it is best known for its traditional Old Town where you can taste some of the delicious Tunisian cuisine.

La Griba synagoge
Built in the 7th century BC, the La Griba is a fascinating and beautiful landmark the history of which dates back to the arrival of the first Jewish
settlers on the island of Djerba.

Guellala
Head to Guellala, a small area and an extremely popular tourist area which is famous for its spectacular pottery. You can stop in at the Guellala Museum which is located in an architectural masterpiece and filled with ancient artifacts which enable you to soak up some of the history of this exquisite island.

El Jem (UNESCO) (middle of Tunisia)
The amphitheater was built around the middle of the third century AD and was thought to house up to 35,000 spectators. It has been used for filming the Oscar winning film ‘‘Gladiator’’.

Borj El Kebir
Is a fortress built at the end of the 15th century on the site of the former Fatimid palace and is considered one of the finest specimens of Ottoman military architecture.

Tataouine
It’s a city located in southern Tunisia designed for coolness and protection. The film star wars and the X-files were filmed her.