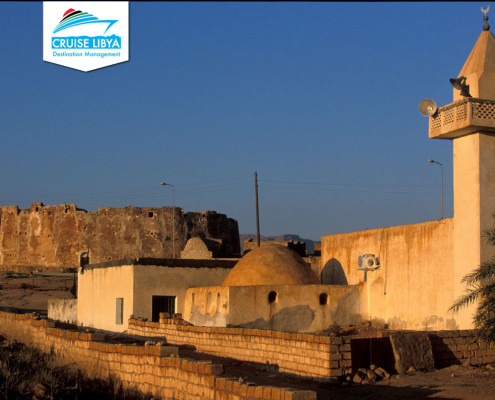 The villa is home to Libya’s largest and most spectacular example of Berber architecture ” Qasr al Haj”. The circular, and completely enclosed fortified granary is wonderful preserved. This qasr al Haj was originally used to store the local produce such as olive oil and grains. Each family in the village would have a special designated place. The whole structure is usually circular and has a main entrance gate. It is these qasr that bring to mind the statement mentioned by some historians in that the Libyans were the first to invent the banking system and therefore you are looking at one of the oldest banks in the world. In a way, each one of these rooms has evolved to become a vault in modern banks where wealthy families can deposit their precious valuables for safe keeping. The qasr was established in the middle of the 12th century . It’s contains of 114 rooms which is the exact number of the books in the holy Koran. The qasr was used as a resting and a meeting point for the pilgrims in their way to the coastal cities and hence its name: Qasr al-H’aj (The Pilgrim’s Castle).